Ndotto Is Coming Thursday, August 5th at 10:30am. Be there to celebrate! 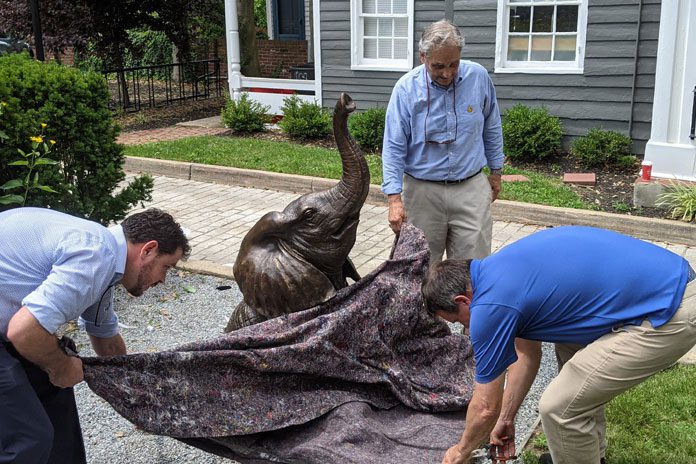 Our baby elephant is moving into Haddonfield’s Children’s Sculpture Zoo. A 450-pound bronze baby elephant – modeled after a real-life orphaned baby elephant found in Kenya in 2014 – will move into the Haddonfield NJ Children’s Sculpture Zoo on Thursday, August 5 – the real-life elephant’s 7th birthday – with a parade and party, costumes, masks, toys and treats for his human fans.  The event is rain or shine and children of all ages are invited to dress in costume and/or bring their own stuffed animals.

Found wandering Kenya’s remote Ndotto hills at just 48 hours old, confused, alone and scared in a throng of sheep and goats, the real-life elephant was rescued by local tribesmen, rehabilitated at the world-renowned Sheldrick Wildlife Trust and named Baby Ndotto – “our little dream.” His dramatic rescue inspired acclaimed Australian sculptors Gillie and Marc to create a 2020 exhibit of 21 life-size bronze elephants that became the hit of London, raising funds and awareness for these endangered animals.  Videos can be found at www.SheldrickWildlifeTrust.org/orphans/ndotto. 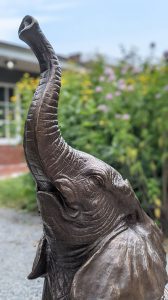 The artists created only three life-size versions of Ndotto, which will soon be found only in Haddonfield, New York and London.  The sculpture was crafted in China in early 2021 and was scheduled to arrive in April but with shipping schedules disrupted by the pandemic, his travels were slowed as he moved on a container ship from Beijing through the Yellow Sea, East China Sea, Philippine Sea, across the Pacific Ocean to Cartagena in Colombia, South America, and then through the Panama Canal.  The final leg of his journey saw him sailing between Cuba and Haiti, past the Bahamas and then north in the Atlantic Ocean to the Port of Elizabeth NJ where he was inspected by U.S. Customs.  Finally he was trucked to Philadelphia and then Haddonfield.  On August 5 at 10:30am he will be escorted from just west of the Haddonfield PATCO station on Kings Highway, past the “Haddy” dinosaur sculpture to the Zoo at 309 Kings Highway East on the corner of Evergreen Lane.   He is 54 inches tall, 54 inches long, and 35 inches wide and will live in peace with other Zoo residents including a bronze life-size giraffe, bunny, toad and sea lion, and a bench of lions and griffins.

“With the generous support of donors, the Haddonfield Outdoor Sculpture Trust (HOST, www.HaddonfieldSculpture.org) has been fortunate to acquire many beautiful sculptures for free public enjoyment,” said Stuart Harting, founder and chair of HOST, and 2020’s Citizen of the Year.  “These are all welcome opportunities to enjoy art in a beautiful setting, take selfies, engage in social media, and learn more about art and the world around us.  The Children’s Sculpture Zoo has been especially popular during the pandemic.”  Donors for this particular sculpture were Joseph E. Murphy, Lisa Wolschina, 1st Colonial Community Bank, and Surety Title Charitable Foundation.  There will be water ice as well as free popcorn from Sparrow’s. 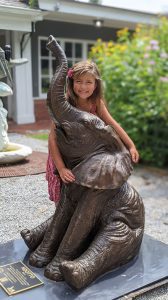 7-year-old Liliana Harting hugs Ndotto after he was uncrated and inspected.

A naming contest announced in the Spring received several hundred entries, with the most popular being various versions of “Ndotto,” such as Haddondotto, Ndoto Kidogo and similar versions, with many pleading to keep the Ndotto name.  The work of artists Gillie and Marc, called “the most successful and prolific creators of public art in New York’s history” by The New York Times, spreading messages of love, equality and conservation around the world, can be found at www.us.gillieandmarc.com and in art galleries and public sites in more than 250 cities.

The Haddonfield Outdoor Sculpture Trust (HOST) is a nonprofit public/private outdoor art initiative bringing traditional and contemporary works by noted sculptors to the downtown district, some permanent and some rotating.  Several sculptures have been purchased by residents and donated to the Borough of Haddonfield on a permanent basis.  Many others are on loan or lease from the artist, and are available for purchase for private or public use.  These sculptures constitute an ever-evolving outdoor gallery where they can be enjoyed by all until they find a permanent home.  Photographs and descriptions of all sculptures, information about artists and more can be found at www.HaddonfieldSculpture.org and on Facebook, Instagram and Twitter at HOST08033, and self-guided tours are free and available 24/7.

For more information on HOST and this installation, contact Stuart Harting, 609-876-3889, milthaddon@aol.com 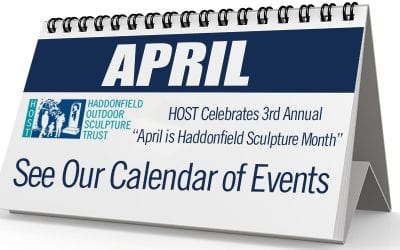 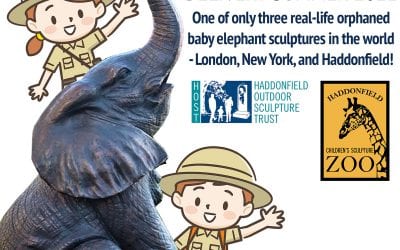 Name Baby Ndotto!  Several years ago an orphaned baby elephant was found wandering the remote Ndoto hills of Kenya.  Just 48 hours old, he was rescued by local tribesmen and rehabilitated at the Sheldrick Wildlife Trust, where he was called Baby Ndotto, which means...